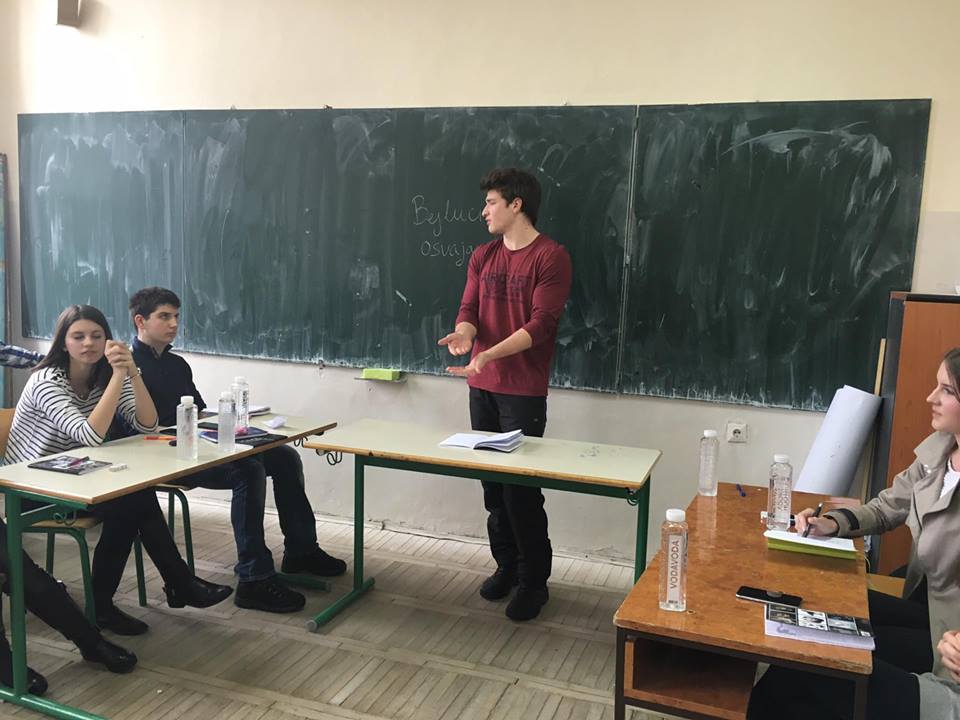 The debate conducted by Zorana Dulovic ’15 on February 2 was centered around the issue of discrimination of Roma people. The project was promoted on social media and through school announcements. Six participants participated in the debate which took place in the ‘Vuksan Djukic’ high school in Mojkovac. The judge panel consisted of a teacher and two students with experience in debating. Nearly 70 students and teachers attended the event as spectators.

The FLEX alumna’s participation in the EEFA Workshop was essential for organizing the debate. There she received new knowledge about human rights and learnt how to develop and plan activities. On February 26 Nevena Djurickovic ’14 implemented a debate on the topic of economic discrimination in her high school ‘Gimnazija Slobodan Skerovic’ in Podgorica. More than 20 students took part in the debate, some of whom were preparing for the upcoming national debate tournament, and many more attended the event as spectators. In the run up to the event the FLEX alumna trained the participants using the EEFA Workshop’s materials.

‘The debate made the students realize how big the problem of economic discrimination in our society really is and encouraged them to look for solutions,’ says Nevena. Aneta Katuric ’15 focused on gay rights and organized a debate on the topic: ‘Can same sex couples adopt children?’. The event was conducted in a local high school in Kotor on March 4 and was attended by 30 high school students. The FLEX alumna promoted the activity on social media and through printed leaflets. All the participants received certificates at the end. The students enjoyed the event so much that they organized two more debates on their own afterwards.

Milica Knezevic ’15 conducted the debates in the Cetinje Gymnasium on February 25 and March 11. The topic of the debate was ‘Should theology be taught in high schools?’. The event was open to the public and approximately 35 people attended the event. To motivate students the FLEX alumna invited a guest from Podgorica to judge the event.

‘The EEFA Workshop helped me to understand human rights in a completely different way. Now I know how human rights have developed and also how they are implemented in different countries,’ highlights Milica. On 27 March Dina Abazovic ’15 conducted a debate for students aged 15-18 in her high school ‘Gimnazija Niko Rolovic’ in Bar, Montenegro. The topic of the debate was the same as in Cetinje – ‘Should theology be taught in schools?’. Prior to the debate the FLEX alumna organized a number of preparatory meetings during which the participants learnt the format and practised their debating skills. The event was conducted with the support of the high school and one teacher took part in the debate as a participant.

‘The debate was so successful that the students decided to organize another one in May and many more would like to join in,’ says Dina. She notes that the EEFA Workshop helped her to develop her debating and project management skills which were necessary for organizing the event.

All the FLEX alumnae hope that the initiatives will be continued in the local high schools in the years to come encouraging students to express their opinions and be socially active.

Physical Distance Can Bring Us Closer Together: Virtual Reunions in Montenegro