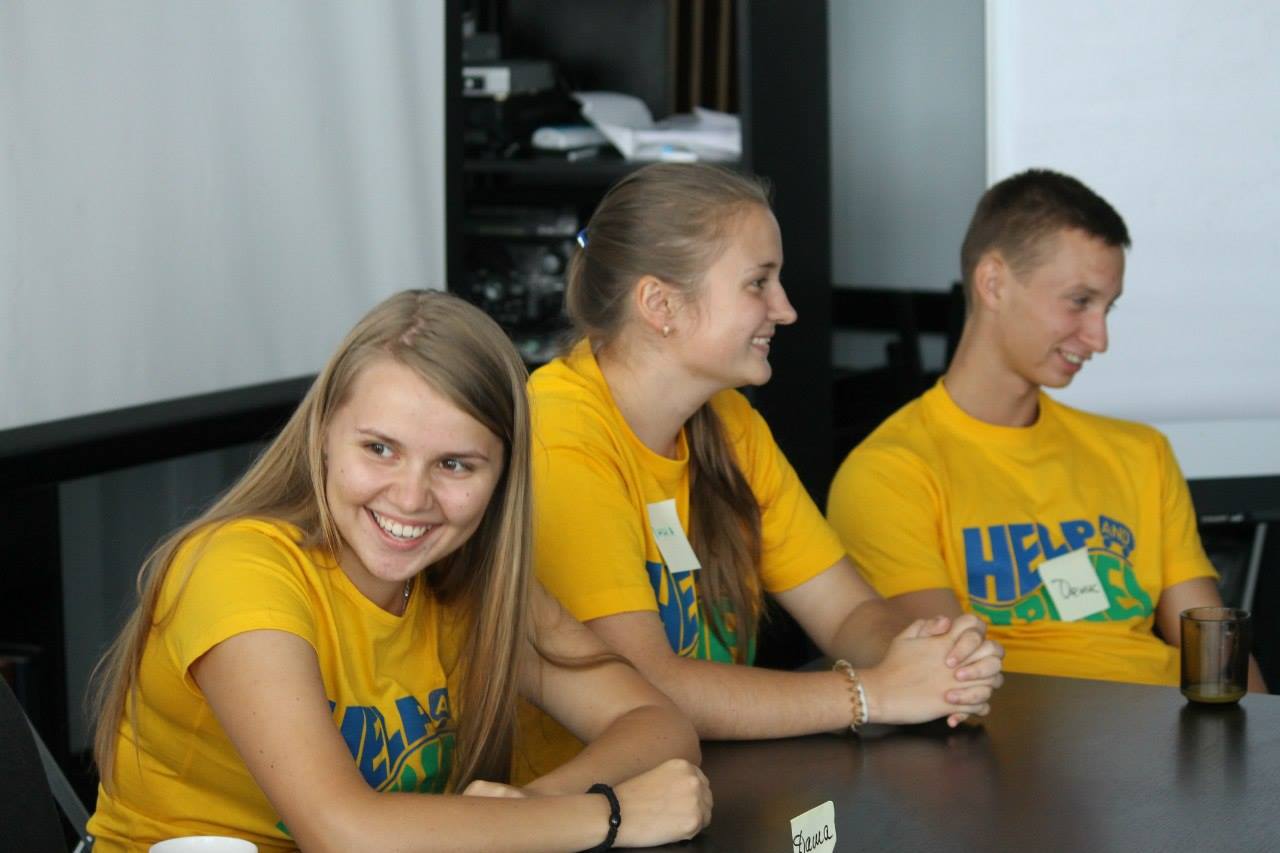 Every person is capable of making a difference. Through this story I want to show an example of how the small steps we make towards our dream really matter and lead to big changes. The story I am going to share with you is about 7 young people and their creation of the project called “Help and Travel” that received funding through FLEX Alumni Grants program in 2013 and again in 2014.

In 2012 I returned home from my exchange year in the USA and shared with the FLEX alumni community and my peers the idea of Help and Travel. Together with my former US classmates I had a chance to travel to small communities in 4 states and helped local communities with those things that they struggled with daily through the “Pay it forward tour”. During those 7 days, I interacted with motivated and open-hearted mentors and participants. The idea of students changing the worlds of these communities inspired me to continue this work in my home country. And so with this the idea of Help and Travel started in 2012. Of course, each idea starts with preparations and fundraising. The most challenging part for me and my team was securing project funds in order to accomplish our goal.   It was then that I learned from my local FLEX Alumni Coordinator that FLEX offers grant funding for outstanding projects through FLEX Alumni Grants initiative. At first, we were not so experienced in applying for grants, but we decided to try our luck. It took us two weeks to fill out the application form and collect all the organizers’ resumes and letters of support. In fact, letters of support were the most sifnificant and hardest part of the planning, because in order to obtain them, we usually traveled to our chosen communities, met up with the heads of village councils, discussed our plans over and over again and only after that – we received letters of support. In addition, to make the process of planning and preparing for the tour easier we partnered up with two local NGOs- Greencubator and Lets Make Ukraine Clean -that helped us to promote the  Help and Travel project. Preparations for Help and Travel took 9 months. In May 2013 we received good news from the FLEX Alumni Grants team about our project being selected. A month later we received our funds and were able to start the project.  In the summer of 2013 we headed off to 6 different regions in Central and  Eastern Ukraine. A group of 21 carefully selected volunteers, one driver and directors Kyrylo Beskorovainyj ‘2011 and Oksana Kasmina started the journey that influenced the lives of thousands of community members, helped them realize that if they want  change, they have to start from themselves and not to be afraid of taking the responsibility for their communities.  We, volunteers, were not picky at all – we slept in sleeping bags in schools and recreation centers. I still reminiscence about how much fun we had – going to bed at the same time and waking up in one big hall in the morning. As part of our agenda in each town we tried to help as much as possible. Some of the examples of our work included installing playgrounds, clean-up events, painting and renovating playgrounds, bridges, and other town areas that needed improvement.  As part of each trip we talked to residents about the importance of giving back to the community through volunteerism. Each tour included an assigned person to work on cultural nights and conducting team building activities with the communities.

The project was so successful that in 2014 we reapplied and received funding again. We had our second tour that I consider to be even more successful than the previous one. The fact that we won grants two years in a row is a great motivation for us to keep implementing this project.

My advice for FLEX alumni and for those who still hesitate about whether to apply for the FLEX Alumni Grants or not, I would suggest not to lose this chance to turn the idea you were dreaming of into a reality. And always keep in mind that your small steps matter, so keep changing the world for the better.

P.S.  You can learn more information about Help and Travel’s activities and trips by going to the Official Facebook Page. Be sure to check the Youtube Channel  for  Help and Travel documentary movies.