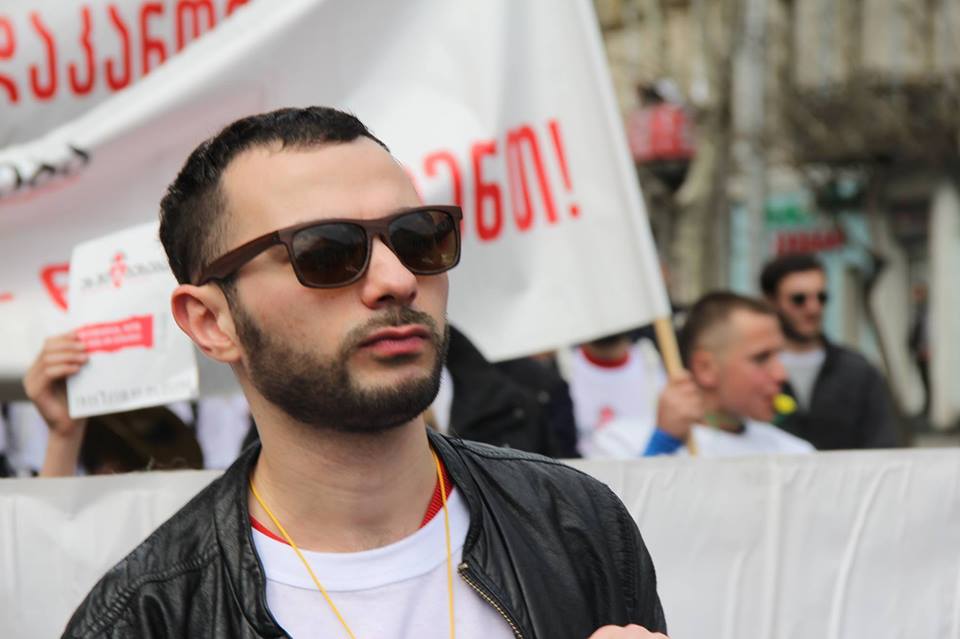 “The 90s in Georgia are called ‘the dark times’ – and not only because of violence and poverty. Often there was no electricity and at night we used candlelight or oil lamps to do homework. In such conditions dreams about studying in the U.S. seemed wild,” remembers Mikheil Benidze.

But even in those years his parents always looked towards the future. They sent him to a state school specializing in the English language and did their best to provide him with everything he needed for studying. Mikheil recalls how occasionally his Dad would leave the house with a bag over his shoulder. In this bag he’d carry some of the family’s most valuable belongings and sell them at a local market. But while money and sometimes even food was scarce, encouragement and inspiration were never lacking in the family.

“Strangely I didn’t feel the severity of those years. My parents completely sheltered me from it and only motivated to do my best,” he says.

And one day the wild dream came true. Mikheil received the call informing him that he was selected as a finalist of the Future Leaders Exchange Program (FLEX). That meant that he was going to study in the U.S. as a high school exchange student – against all odds. “It was my first time on a plane and first time abroad. But I can’t remember my very first days in America – everything went by in a blur. I just remember that it was really hot and humid and that I immediately liked my host family.”

His first day of school was more memorable however. Mikheil joined a cross-country club and went to his first practice. There he noticed that his fellow classmates were unusually respectful towards him. At first he couldn’t figure out why and attributed it to him being a foreigner. But eventually he realized that they took him for a coach’s assistant – he had already grown a beard by that point and looked rather mature.

While his whole year in the U.S. was full of exciting experiences, Mikheil remarks the Civic Education Week in Washington, DC as the one which had the biggest impact on his future career. There he learned about democracy and good governance and met various stakeholders – from senators and congressmen to activists to journalists. An important part of this week was meeting fellow FLEX alumni who shared the same interests and cultural background. Even now, thirteen years later, Mikheil remains friends with a few of them. Inspired and full of ideas, Mikheil returned to Georgia a couple of months later. But there, reverse culture shock was waiting for him.

“Simple things annoyed me –puddles of water on sidewalks, bad roads, poor infrastructure. I was constantly frustrated and wanted things to be different. That’s when I decided to become an active citizen,” he says.

Throughout the end of high school and all of university Mikheil was very active – together with fellow FLEX alumni he volunteered in orphanages and raised awareness about disability rights, organized FLEX alumni and civic education activities. Eventually he got involved in election monitoring and realized that that’s where his true interest lay.

Now he is the Executive Director of a Georgia-based organization called the International Society for Fair Elections and Democracy (ISFED). While the main focus of the organization is on election monitoring, the broader aims include encouraging democratic reforms, promoting European integration and developing citizen engagement on the ground.

Mr. Benidze and his colleagues are also piloting a new initiative – they are researching the role of social media in Georgian elections and fighting against aggressive discrediting campaigns and false news on social media platforms.

“The 2018 elections were very polarized. There were lots of anonymous groups publishing discrediting information or sponsored content online, including information about the work of the ISFED, and we tried standing up to false news,” says Mikheil.

Throughout the elections they monitored how such campaigns influence public opinion and raised awareness about groups which were attributed to radicals. They also compiled specific recommendations to the government on how things could be improved and worked on cases of human rights violations during the campaigns.

One such example was the tragic case of a high school principal who found herself under severe pressure to participate in aggressive election campaigning, refused and, as a result of stress, suffered a fatal heart attack. The ISFED highlighted this case in their report and it was later referenced in the official letters of the European Parliament Members addressed to High Representative Mogherini and the Prime Minister of Georgia. Even though he describes the job as hectic and intense, Mr. Benidze enjoys all different aspects of it and, just like his parents in the 90s, looks towards the bright future.

“I want to see real democracy in Georgia and I know that it can only be established if we have the right systems in place, such as fair and transparent elections. There’s a lot to overcome – the difficult Soviet past, our current political and economic challenges. But I believe that there’s an opportunity for a great change and I want to be a part of it,” he nods confidently.