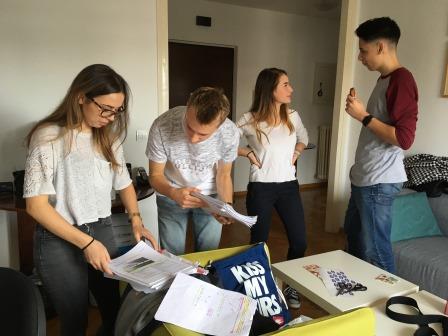 In the FLEX world, the FLEX City Representative program gathers the very best of the alumni community and those most eager to engage in their communities and trains  them become the leaders of tomorrow. By working in their regional networks, City Representatives are a right hand to the Alumni Coordinator. While the program has many benefits for those who are ultimately selected, there are also many responsibilities. Until recently, the title of a City Representative in Serbia has been reserved for mostly older, experienced alumni. This year, however, the program has been promoted within younger generations as well, because we believe they have so much to gain from the opportunity.   This resulted in 13 City Representatives in Serbia from six recent generations (‘12-’17) and nine different cities.

On October 21, Serbian City Representatives gathered at the American Councils office in Belgrade for the mandatory City Representative Training organized by Alumni Coordinator Nemanja Miltenovic ‘13 and supported by the Senior Program Officer Rebecca Strattan. The main purpose of this training is to prepare the CRs for the year ahead, provide them with tools necessary, and set goals and standards.

The training consisted of 5 topics: Nemanja said to the new City Representatives: “My goal for the upcoming year is not to see my name in the reports, and faces in the photos. I want to see your names and faces, and be able to show and tell others how great you are.”

This year, the standards are much higher for the City Representatives (CR) in Serbia. Each of them is expected to organize one activity each month and report regularly. They are also expected to support Re-Entry projects in their cities, and apply for FLEX Alumni and GYSD grants. Social media has also become a large part of their duties, with a schedule assigned by the Alumni Coordinator. In order to keep a track of everything and everyone, the team has decided to connect on the management platform Trello which makes it easier to monitor tasks and see what other CRs are doing. Monthly meetings have also been launched in three major hubs: Belgrade, Novi Sad, and Nis. The upcoming year will be quite interesting for the Alumni Community in Serbia. A lot of fresh CRs will surely bring new ideas and projects, and hopefully a lot of positive change in Serbia. “I was personally blown away by the level of enthusiasm and engagement shown by the CRs at the training. I hope that we will be able to maintain it together, because I couldn’t be happier and prouder to finish my term as the Alumni Coordinator next year with a team like this,” concluded Nemanja Miltenovic ’13.