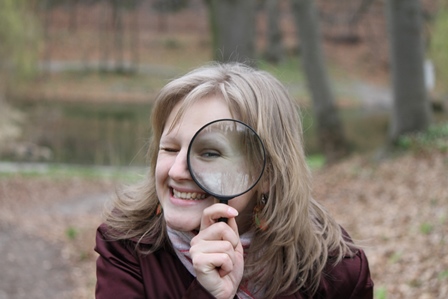 …The journey to success is worth all the troubles and fears. Just remember – you can be weak but you are never alone. There are like-minded people who are ready to support you, even if they live on the other side of the continent,’ Tetiana says. ‘Last year I had to spend a few months in hospital and missed two semesters of my PhD studies. Finally, after months of visits to the doctor, I was diagnosed with wheat intolerance and had to stop eating bread. As a scientist I’d always been aware of intolerances and allergies, but never thought that they could happen to me. This diagnosis made me realize how much allergies complicate peoples’ lives and this motivated me to help the community,’ says FLEX alumna and biologist Tetiana Pochynok ’02.

She didn’t need to go too far for ideas!  At the time her friend and colleague Kateryna Voloshchuk had finalized results of a three-year pollen monitoring project in Lviv. Together they decided to share the results of the research with the community in the form of an allergy calendar. With the support from the Biology Department of Ivan Franko National University, the team printed out the calendar. ‘With the help of a local artist we designed a calendar which shows when various types of trees and plants produce pollen. The peak of pollination for each plant is highlighted in red and orange and people with pollen allergies are recommended to start taking their medication two weeks before peak season,’ explains Tetiana. Pollen concentration in certain plants is much higher than in others. According to the calendar, alder pollen, which is only released in March and April, affects people with hay fever more than of other plants. The city of Lviv is surrounded by forests of birch, oak and beech, creating high pollen concentration in the spring.

‘Our calendar is not a scientific publication, but it is the summary of an enormous research project.  Every day for three years, Kateryna measured pollen levels in air and made notes. She had to postpone so many weekend plans and trips because of this systematic work,’ remembers the FLEX alumna. The calendar has also been referenced in recent scientific works on aeropalynology (the science of spores and pollen grains).

Tetiana and her team published the calendar in late March when, after a long winter, people are beginning to suffer from hay fever afresh. They distributed it to city clinics, universities, and schools. A group of local volunteers promoted the project alongside the organizers. ‘Afterwards many Lviv residents told us that they had found the calendar extremely useful and shared it with other members of the community. Even though the calendar is only applicable to the Lviv region, some city visitors found it useful as well,’ says Tetiana. ‘In the spring I met two Canadian ladies who both had hay fever. As the climate was new to them they didn’t know when to start their allergy medication and our calendar made it easier for them to decide’.

Besides the allergy calendar Tetiana continues working on her PhD thesis in plant morphology. Finding scientists who are specialized in the same topic is difficult and she often needs to look for colleagues and mentors abroad. These past few years, she visited the University of Salzburg in Austria where she conducted research in the nearby mountains and worked in a lab. The latter she found even more exciting than roaming the Alps.

‘The university has a very well-equipped laboratory and I loved taking care of it. And as a result, it was spotless,’ she remembers. ‘When I came back after two years to the same university, I found my old lab in disarray. My mentor noticed my confusion and smiled: ‘We are so excited to have you back. Now our lab will be perfectly organized again’.

‘I think that being innovative and organized was something that I brought back from my FLEX year and it helped me in my scientific career later,’ she adds. Tetiana is active in the FLEX alumni community. She helps to run a weekly English language club for local high school students, which was set up by Roman Polishchuk ’13 and Yuliana Pavlyk ’13. During the weekends she volunteers in a local orphanage where she mentors two boys with learning disabilities and takes care of other children.

To Tetiana both her scientific and social work are connected by the same goal – serving her community. ‘Paying back to your community feels wonderful. Don’t hesitate to help others around you by using your skills,’ she advises FLEX alumni.

‘I used to be scared of challenge and in the past this fear stopped me from succeeding. Later I realized that the journey to success is worth all the troubles and fears. Just remember – you can be weak but you are never alone. There are like-minded people who are ready to support you, even if they live on the other side of the continent,’ she says.