Home Alumni Highlights Oleksandr Shymanko ‘In the U.S. I began to think outside of the... 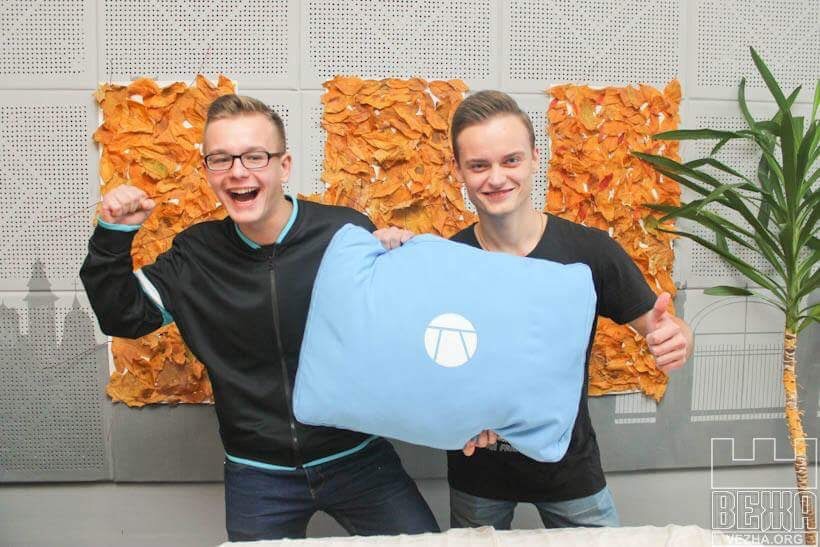 Entrepreneur, innovator, branding designer, and student Oleksandr Shymanko – there are those people who you wonder how they succeed to complete everything with only 24 hours in a day. ‘Don’t move to another country just because it’s got better living conditions – you can improve the life in your own country by being creative and pro-active. Rather than changing your place of living, focus on changing your local environment and yourself,’ Oleksandr advises FLEX alumni.

In September 2015 Oleksandr Shymanko won first prize at the Falling Walls Lab in Kyiv 2015, a conference for young innovators hosted by the Klitschko Foundation and the Taras Shevchenko National University of Kyiv. As a result of the event, in November 2015 he was invited to the follow-up international conference in Berlin where he received the Audience Award and a title ‘The Young Innovator of the Year’. The project that he presented there is called PiPillow –  a smart pillow that helps you get to sleep, monitors your breathing, and wakes you up at the time which is best not just for your employer but also for your body.

Even though the concept of this ingenious gadget is little over a year old, the conception of the idea goes all the way back to Oleksandr’s FLEX year, specifically to the first couple of months when, surrounded by the comfort of his new American home, Oleksandr kept tossing and turning in bed all night long.

‘I grew up in a two-room apartment and was used to falling asleep with my parents watching TV or talking in the background. I dreamed of having my own room all my childhood and was really excited that I’d finally have it in America,’ says Oleksandr. Yet, having his own space at his host family’s house was both a blessing and a curse: ‘During the day I lived the dream – I played my XBox, listened to music, and enjoyed being alone, but at night it was a completely different story.  Not used to falling asleep without noise, I felt restless’. Playing music or audiobooks all night helped him to fall asleep, but it bothered his American family members who would then lie awake disturbed by the noise. Earphones did not work… he was starting to become desperate.  It was during that time that Oleksandr started dreaming of having a magic pillow – the one that would lull him to sleep, keep track of his breathing, and soothingly wake him up with a favorite song in the morning.   Since no such device was available on the market, Oleksandr was left with no other choice but to invent it himself. It took him almost two years to develop the gadget from scratch but the confidence which he had brought back from the U.S. carried him through his doubts.

‘The best thing about the FLEX program is that it changed the way I perceive things. In the U.S. people encouraged me to be creative, not to be afraid to express myself and so I began thinking outside of the box,’ reflects Oleksandr. In the winter after his return to Ukraine, Oleksandr described an idea of PiPillow to his friends and they joined forces to turn it into a cozy and functional object.  The concept has gradually been adjusted to the needs of different groups of people – now with the help of PiPillow, parents can monitor their children’s sleep, people with breathing problems can investigate their sleeping patterns, and those who have difficulty waking up in the morning may be woken up at the most comfortable time for their body (over the span of 15 minutes).

Oleksandr plans to raise funds for the project through a digital platform for creative ideas Kickstarter and start producing PiPillow for commercial use.

Besides working on PiPillow, Oleksandr is a student and a branding designer at the coffee roasting and distribution company Coffee Labs Roasters. There he is in charge of creating the company’s logos and branding material. The FLEX alumnus learned the basics of web design while studying in his American high school and has since continued mastering his skills. Captivated by his prospects and technological advancement, Oleksandr dreams to create an iconic Iron Man exoskeleton with a range of superhuman functions, including flight and invisibility. ‘Of course it sounds funny, but I believe that one day it will be possible to make it. I’m fascinated by smart gadgets and want nothing else than to create more of them,’ says Oleksandr.

With his strong belief in the capacity of the human brain, he feels anxious about only one thing – how fast time is passing: ‘I’m very close with my American family and talk to them at least twice a week. Now back in Ukraine I regret the time that I wasted playing XBox in my room.  At the beginning of my American year I thought that I had all the time in the world and then…it was suddenly gone. I’m trying to make better use of it these days’.