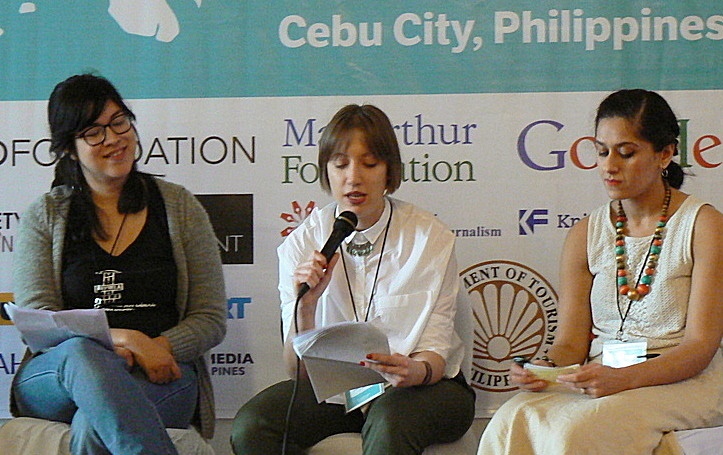 What outlet do you write for? I am a contributor at one of the world’s biggest social media platforms Global Voices. It’s a community of over 800 bloggers, social media activists, and analysts from all over the world whose mission is to amplify voices that are not always heard or that are marginalized and to explore different angles of a well-known story. Global Voices also runs the Advocacy Project seeking to build a global anti-censorship network of online activists to promote freedom of expression and Rising Voices, which aims to extend the reach of citizen media by connecting and supporting media activists around the globe.

How did you start writing for Global Voices? It happened when I worked for a Russian election monitoring NGO called Golos. Global Voices interviewed us about how technology can be used to defend the rights of voters, my interest was piqued and I started following them. Then in 2011 a movement against the new tax code in Ukraine began and for the first time ever, bloggers livestreamed the events, by an activist who had brought a web cam to a demonstration. I thought that it was a pity that no one talked about the new development within social media and the way it affected civil society, so I decided to cover the story in Global Voices myself. I liked doing it so much that I have been writing for them since. My writing pattern is quite patchy – I write when I am inspired, not on a schedule.  During Maydan I wrote as regular as once or twice a week.

What are your main subjects? I mainly write about new processes that take place online and draw attention to facts and stories that are uncovered by activists, but do not get into traditional media. In some ways I feel like all this time I have been writing the history of online activism in Ukraine. Until 2013 it was pretty easy to follow since they were only so many bloggers, but now everyone including Ukrainian politicians are online, and it’s becoming more challenging to grasp. It’s fascinating how influential social media has become in such a short space of time. Here is another link to a post which was crowdsourced from the Global Voices community and later covered by the BBC World Service by Tetyana Bohdanova.

Do you see social media as a positive development? Like almost everything, social media can be both positive and negative. On one hand, it opens doors for more transparency and gives platform to discussions, which have previously been swept under the carpet. On the other hand, the more people join social media, the more content manipulation occurs. You see the increase of hate speech, trolling, and witch hunting online. Social media can easily polarize people and damage communities.

As a social media activist, have you ever experienced any of its negative sides personally? Since I don’t express my own opinions I haven’t faced any serious issues personally. But I’m always concerned about the safety of those who I interview since I am never completely sure how aware they are of the power of social media. If you amplify their voices through a large media platform, it can be picked up by global news agencies and read by millions within hours. So even though we have a strict policy on how we quote, I always go beyond that by asking my interviewees individually.

What are the highlights of your work? I’m happy to be a part of the diverse Global Voices community. Many of us speak multiple languages and have grown up in an international environment. Here you can draw a parallel with the FLEX alumni who return to their native countries carrying a mixture of two cultures. Another great thing about being a contributor at Global Voices is that I’m mostly free to choose what I want to talk about. During Maydan I had an opportunity to explore the role of individuals and grassroots movement while the international media mainly focused on the fact that it was a geopolitical struggle, often taking the Ukrainian people out of the picture altogether.

What was your strategy? Together with other bloggers and in a space of a few weeks I got involved in organizing a media network that exchanged stories and coordinated the coverage. It was very tricky to do and I’m proud that thanks to our group effort it worked out. How would you like your career to develop? Apart from being a social media activist I am involved in projects with a focus on building civil society in the former USSR countries. Right now I work for the National Democratic Institute for International Affairs (NDI) and most of my projects in one way or another involve civil society actors utilizing new communication and information technology in their work. Civil society work is something I am extremely interested in and I’ve been doing it for nearly ten years. I started as a translator at the International Election Observation missions and have worked in a number of domestic and international NGOs since. In the future I’d like to integrate my social media activity and civil society work into each other.

What was the biggest impact of the FLEX program? It was important for me to experience the sense of community – the way American people collectively decide how their towns should develop. I have certainly used this knowledge in my later projects. The biggest impact of the program however was not the year in the U.S. itself, but what came afterwards. Becoming a part of the FLEX alumni community and taking part in various alumni projects influenced the choice of my university and career.

What would you like to say to fellow FLEX alumni? Unfortunately it seems that the older we become, the more we drift apart. New experiences take over and we begin to forget that we are a FLEX community. I’m confident that reconnecting with each other will bring great benefits for every one of us.