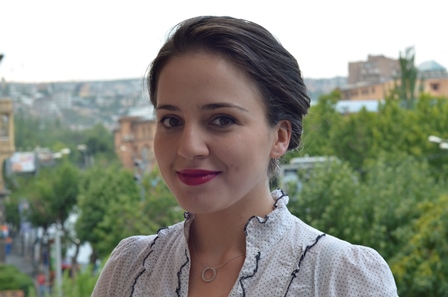 ‘Make sure that you bring the inspiration of your FLEX year back to your home country. Never stop dreaming because it’s your aspirations and hopes that will eventually help you find yourself’. The story behind Magda Markosyan’s professional success is simple – she met a friend, Diana Hovhannisyan, who shared her interest in marketing and creative solutions and decided to establish her own company. They came up with a name, created a logo, registered the business and for a period of time combined full-time jobs with weekend and evening meetings: ‘At first there were just two of us and we spent all our free time setting up MAROG. It was fun because we were finally doing what we’d dreamt of but it was also stressful. We didn’t know where or how to begin.’

The team started strong and the first project a success that was talked about on social networks. At that time nobody knew who they were and what their field of expertise was. After a few hectic months of combining two occupations Magda realised that developing MAROG needed her full attention and left her Project Manager position at the Hayastan All Armenian Fund to become the CEO of the 2-person company. Magda’s entrepreneurial knowledge gained through the Global Village Program for Future Leaders of Business and Industry at the Iacocca Institute at Lehigh University in 2008 was essential for MAROG’s development. They started with outsource marketing services and were one of the first companies in Armenia to provide this. Finding early on that this approach was too costly, especially for a newly-born business, they moved to creative solutions. ‘Moving across was difficult especially since we immediately faced an army of local and international competitors. It took us another couple of months to redesign the website and establish new contacts, but as soon as we were up and running new clients started coming in, first local, then international,’ Magda says.

Nowadays MAROG has a long list of big international brands which they work for, including Marriott Armenia, Chivas, Jameson Whisky, American Councils, and Coca-Cola. Their creative services consist of branding, digital marketing, events, ATL (above the line), BTL (below the line), and TTL (through the line) advertising.

During their recent launch of Coca-Cola Zero, MARGO held an outdoor show with Armenian music celebrities followed by an opening of a unexpectedly drinkable billboard and live testing of color changing mugs, a strategy adopted from the Coca-Cola marketing campaign in Indianapolis. Magda estimates that after the release of the viral Coca-Cola Zero video over 30 thousand people will be reached.

Apart from commercial projects, MAROG conducts its own events promoting cultural traditions and civic activism. For instance, in summer 2013 together with a graphic designer Ara Aslanyan they rediscovered an ancient Armenian pagan holiday Vardavar.  ‘Back in the old days it was a celebration of love between two Gods, and young people were allowed to date their sweethearts only during Vardavar. Nowadays the entire population of Yerevan splashes each other with water instead. It’s fun but the holiday is much more than water games and so our focus was on the other, almost forgotten traditions,’ Magda shares. During the preparation for the festival, entitled ‘Not Splashing’, MAROG dug out those disappearing customs and introduced them in a modern way. There were mimes, mysterious booths with special treats, and photo shoots in rose-petalled pools. Not to disappoint water game-thirsty audiences, there were plenty of ice bucket-style escapades as well. This new understanding of the festivity aimed to inspire people to reconnect with the history of the place.

Besides CEO duties Magda volunteers for the Global Shapers initiative in Yerevan where she was involved in running the No Melanoma awareness campaign. With the initiative, in 2015 she will work on genocide awareness and prevention campaigns in recognition of the 100th anniversary of the Armenian genocide.  While volunteering at the Global Shapers she primarily uses her professional skills such as developing and delivering messages and content.

Her main aspiration is to create a place where people enjoy working together. ‘My team consists of some very talented people and we are proud of having a great atmosphere in the office. I wouldn’t want to lose it for the sake of the company’s growth or for money. After my FLEX year I became interested in bigger, but in some ways more personal goals, rather than pure financial success. This experience gave me wings to fly,’ she says.

Dreaming is an essential part of Magda’s work and the one she values most:  ‘Make sure that you bring the inspiration of your FLEX year back to your home country. Never stop dreaming because it’s your aspirations and hopes that will eventually help you find yourself’.