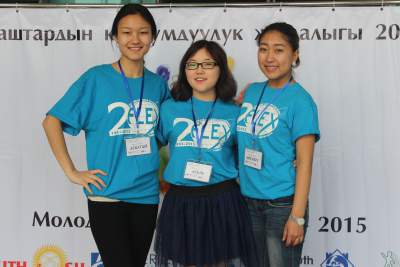 Altynai Melisova and Zhibek Kamalbek kyzy’14 together with two FLEX alumni Askatai Zakirova ’14, Aisuluu Sagyndykova ’14 and a team of nine other volunteers focused on promoting systematic physical training among families through the event called Health Invest, which was supported by American Councils for International Education, the public fund Childhood Institute, and the Sverdlov District Sport Committee. Organized on April 18 in the Bishkek Gymnasia school # 23, Health Invest was a day of fun sport and culinary activities and competitions. and another 117 spectators came to watch the event and support the competing children and parents. Other fun activities included a magic show and a general lottery. Due to its great atmosphere and smooth logistics, the event was a huge success in the community. At the end of the day prizes and medals were given to the participants and tasty treats were handed out.

The event received a considerable amount of media attention as a result of which articles were published in a number of newspapers, news agencies, and the school websites. Zhibek Kamalbek kyzy was invited  to the Eltr local TV channel where she talked about the importance of celebrating GYSD and encouraged Kyrgyz youth to take part in it next year. All its publicity inspired other people living in the area to take part in similar events in the future. FLEX alumni are now planning to do the same event next year but on a larger scale.