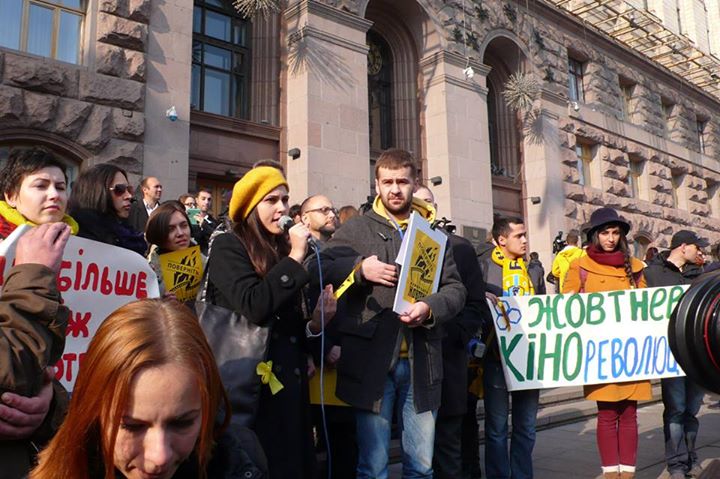 ‘After the return to your country it takes a lot of mental strength to start contributing to change in your community instead of wanting to just go back to America. I wish you to have this strength as we, FLEX alumni, have a great responsibility and cannot dismiss it by putting on someone else’s shoulders,’ is Halyna’s message to her fellow alumni. The focus of her work is preventing the embezzlement of public funds. After her election into the City Council, Halyna initiated the creation of an anticorruption headquarters with a number of different sections – from monitoring government spending to transparency in urban planning.

Being a member of the city’s town-planning committee, she compiled a map of government land allocation for construction. ‘Previously this sphere was under lock and key and members of the general public were not able to get involved or even know what was about to be constructed in their neighborhoods. My mission is to provide people with information about resource distribution and encourage them to participate in the town-planning decision-making processes,’ she says.

By providing the public with a transparent and up-to-date map of future constructions, Halyna and her colleagues are decreasing the risk of conflict between community members and construction companies. ‘I believe that the land is something that belongs to the people and not just the lucky few from the government,’ Halyna points out.

Another area of her work is monitoring government purchases. In order to effectively reduce corruption Halyna uses the power to make ‘deputy inquiries,’ which municipalities cannot ignore without facing possible criminal charges. Over the last three months, three criminal investigations into embezzlement have been started. ‘These cases send a message to all municipal institutions that corruption will be prosecuted. Since the beginning of these investigations we’ve noticed that the prices of purchased state items have been lowered and the overall corruption levels have decreased,’ Halyna says.

She is also developing ecological campaigns: ‘Ecological problems in Kyiv were never solved in a systematic way, they were the focus of individual activists. Now that I have an access to public office, I’d like to introduce toxic waste disposal programs. At the moment we don’t even have places that recycle batteries in the capital’. Since the local deputy position is unpaid, Halyna needs to balance her public service with a job as a full-time analyst at the NGO Anticorruption Action Center. There she works flexible hours, sometimes until 3 or 4 in the morning. ‘It is impossible to completely get rid of corruption since the system in any country is not perfect. The question is how to limit it as much as possible. In order to do that, civil society, including NGOs like ours, need to monitor it constantly.  This way we keep the government on its toes,’ Halyna says.

It was during her FLEX year that Halyna became inspired to start her career in community development. She participated in the Wichita Falls Youth Leadership Program, which gave her a chance to learn how the government bodies in her American town operated and to meet government officials. ‘It was an extraordinary experience. For the first time in my life I realized that people in Ukraine could also live well and that many solutions to problems were quite simple and logical,’ she remembers.

Over the next 10 years she tried out various forms of community organizing – from starting a socio-ecological movement among her classmates and working with FLEX alumni in Central Ukraine as the Alumni Coordinator to participating in her university’s student union until joining The Democratic Alliance in 2006. ‘When I became elected to the City Council my dream to contribute to change came true. Even though we only have 2 seats, the public expectations from our work are very high – we receive more requests from the community than any other party,’ Halyna adds.

‘Improving the quality of people’s lives is possible only through developing infrastructure and civil society. If such a young country as the U.S. could achieve these great results in just a couple of centuries, our ancient European countries should have all the necessary conditions for catching up. This is what I will continue working on,’ she says.

Halyna! Congratulations. Your motivation and determination are admirable. I wish you success in fighting the corruption, as well as in building your skills to contribute to Ukraine’s development! I am sure you will inspire others to join you in this work.

Halyna! I am so proud of you and your work.