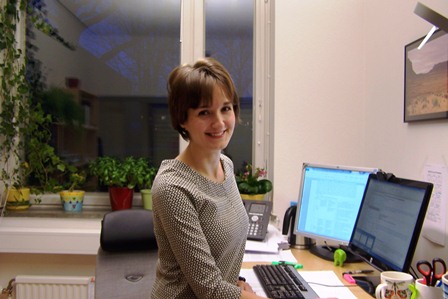 Having recently completed a Masters in European Affairs, Mariya Moskovko ‘05 now works at the Lund University Center for Innovation, Research and Competence in the Learning Economy called ‘CIRCLE’ as a research assistant. She attributes the completion of her Master’s course with Distinction to her FLEX experience – primarily studying in her American high school: ‘My high school in the U.S. was not a typical one. I attended York City High School and many students of the students with whom I studied came from underprivileged families. For some of my friends, lunch was an only full meal that they would get in a day. It was as far from a stereotypical picture of American from Hollywood.  Despite the financial difficulties the students faced, they were extremely welcoming and open-minded, so it was the atmosphere of multiculturalism and world awareness that inspired my later interest in academia and research’.

Mariya is working for one of the several projects of the ‘Globalization of Innovation Platform,’ which studies the ways in which innovation is spread around the world and defines the connection between innovation and development. Her team is international with the project partners being based in five countries.  She monitors technology-driven investments from India and China to the EU and the EU policies that regulate the existing investment regime. Over the last few years and after the 2009 financial crisis, it has become a trend that multinational companies from emerging economies are investing into access and mastering of the established Europe’s technologies.

Sometimes it is only a brand itself which is purchased allowing non-EU companies to enter the European market, while in other cases technology is obtained as well. This phenomenon is called ‘Technology-driven foreign direct investment’.

‘At the moment the bilateral trade and investment agreement between China, India and the EU is being negotiated. This is a new development, as previously only bilateral agreements between individual countries took place. In the context of this changing dynamic we are trying to define what the future might bring,’ Mariya describes. She came to innovation from a well-established field of political science and therefore had to apply her skills in a completely different setting. New knowledge is what she finds most inspiring in her work, while being surrounded by world-renowned researchers brings daily challenge and motivation. In the future Mariya aspires to explore the link between innovation and development in the former USSR countries: ‘Since the collapse of the Soviet Union a lot of interesting regional trends have been established, which people outside of these countries are often not aware of, for example, the inclusion of Soviet countries into the innovation systems of developed countries. There is a lot of potential in terms of technological capability and human capital there. That’s why the way former Soviet countries participate in the global innovation process using their own mechanisms is of extreme interest to me’.

Even though there are more research possibilities abroad, occasionally she feels sad about not being able to be involved in research in her native Ukraine and contribute her knowledge to her country’s development: ‘I have mixed feelings about it. I’m glad that I’m doing something that I am passionate about, but it’s a pity to be involved in it from the position of an outsider. Unfortunately the current situation in Ukraine doesn’t make it possible for me to continue the research there. But, of course, knowledge does not belong to a specific place and if I continue with the empirical study of post-Soviet countries I plan to travel to this region frequently’.

Mariya believes that change should come from the grassroots level and over the years has participated in a number of community projects. Prior to going abroad Mariya was the FLEX Alumni Coordinator for Central Ukraine in 2007-2008 and succeeded in offering alumni many professional development and cross cultural opportunities.  Following Mariya’s studies in Lund, she initiated the creation of a language café at the Karlshamn’s Library where the town’s inhabitants and foreigners taught each other their languages. It was soon discovered that despite its small size, Karlshamn had a vibrant international community and the local people were as eager to explore other cultures as foreigners were to learn about Sweden. When she left for Lund, the project was taken over by the local community.  Since 2008 Mariya has also been serving as Open World facilitator for Ukrainian delegations.

Mariya’s advice to FLEX alumni: ‘You have to cease the opportunities that are offered to you, be positive and solution-oriented.  I think that many FLEX alumni share the same spirit and this is what I miss most when I’m not the part of the alumni community. A lot of FLEX alumni are involved in developing civil society projects within their local communities and these initiatives are inspiring to all of us.  Let’s keep in touch and support each other as the joint power of our successes and ideas is tremendous!’

Any alumni out there who are involved in the field of innovation or work with science and technology? Keep in touch with Mariya at:
maria.moskovko3 at gmail.com
www.linkedin.com/in/mariamoskovko