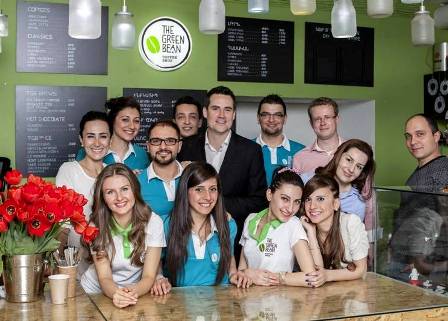 One thing Irina Ghaplanyan is definitely not lacking in her highly successful career is diversity. One thing she does lack is hours in a day. Having recently defended her doctoral thesis in Cambridge, at the moment she is simultaneously working on four projects.

Firstly, she is a regional expert in a project that is run by the Netherlands Institute for Multiparty Democracy (NIMD), an organization, which has been present in the region for nearly a decade.  This project is dedicated to training Armenian parties to structure themselves more democratically.  Her second project is the research on Armenian legislation and women’s involvement in politics to explore the reasons why women’s representation in Armenian politics is still marginal. Funded by USAID, the project is now in the phase of interviewing women politicians and the report will be released next spring.

Besides the research work, Irina is also involved in running ‘The Green Bean’, the first sustainable coffee shop in Armenia.  Together with her sister and husband, ‘We started the shop two years ago. It was a risky idea to run a business based entirely on sustainable practices and against everything that was believed to be a regular coffee shop in Armenia  – such as introducing the policies of no smoking, recycling, and upcycling. But I think the risk has paid off and The Green Bean coffee shop has become popular among local people’. Over time, the café grew into a special zone of interaction and ideas exchange: ‘It was fascinating to see how a small idea in the food and beverage industry grew and how soon the café started serving as a base for other projects aimed at developing Armenia. This is the most rewarding part for me, as I have always imagined Armenia as a country with developed sustainable practices and wide eco-strategy’.

‘The Green Bean’ central policies include equal opportunities employment and diversity.  That’s why Armenian Syrian refugees are working alongside native Armenians in the café.

Apart from political science and sustainability, Irina is also passionate about wine and has participated in establishing the EVN Wine Academy in Armenia. This institution proved to be a success, as more and more people in Armenia are beginning to invest in wine market development.  ‘I have been greatly interested in wine over the last seven years, since my days in London and Cambridge. When I came back to Armenia, I became involved in a local wine-making community. Together we started EVN Wine Academy, where I’m currently leading a wine-tasting course. I enjoy doing it immensely and am hoping to do my second degree on it in London by the end of this year,’ Irina says. For Irina one of the most exciting aspects in her present situation is being back in Armenia. Even though she is not sure what career field she will choose in the end, she considers Armenia’s development the centerpiece of her future aspirations. ‘When I lived in the U.S. and the UK, I always felt a need to be back home. Things happen at a fast pace in Armenia; we have lots of catching up to do and I would like to take part in bringing these changes into the country’.

That’s why at the moment she is also working on the preparation of a manuscript for a book publication: ‘My book will be focused on internal problems, which have shaped Armenia as a country and not geo-political and regional problems, which are mostly talked about. I’m trying to understand why we have taken this specific political course and why, even 28 years later, we are still not much further ahead in terms of democracy and human rights’.

Like with so many other alumni, the FLEX program has played an extremely important role in Irina’s life. ‘FLEX shaped me fundamentally both as an individual and as a professional. It has thrown me into a new environment and taught me to believe in my own strength. I am sure that this ability contributed to all of my further achievements. I will always be grateful to FLEX and I will always feel that I must bring my learned skills back to my own community,’ Irina points out.

‘Try and network as much as possible since there is some latent kindred spirit among FLEXers.  Be outspoken and encourage young people to apply for participation in FLEX since this opportunity will positively influence their entire life,’ Irina encourages other FLEX alumni.