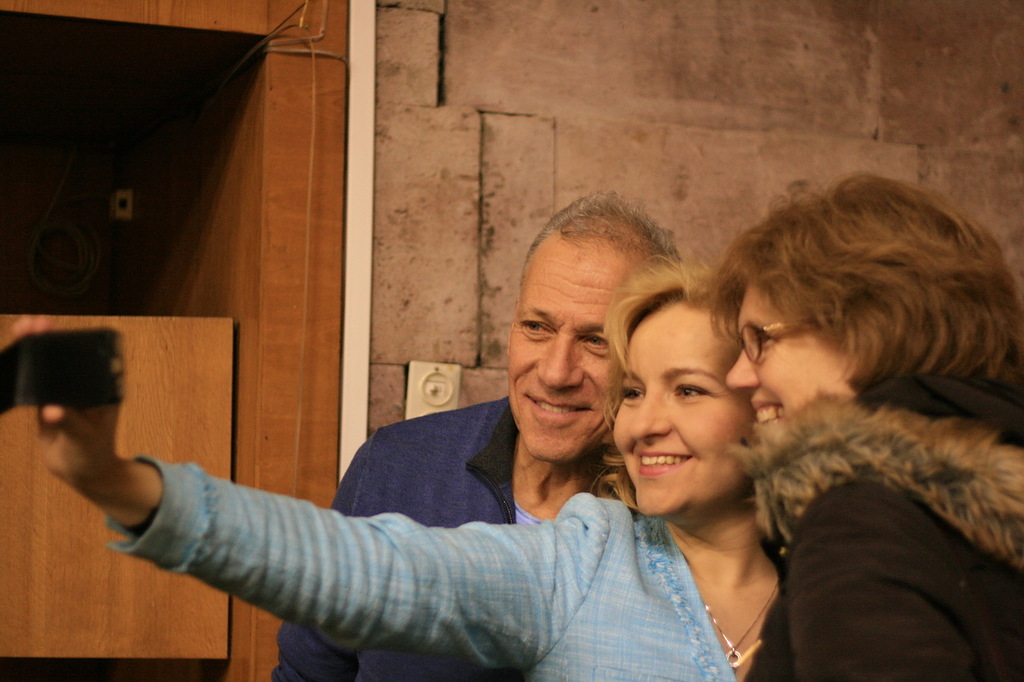 Karina Chupina ‘97 has extended her experience in training, journalism and advocacy for youth with disabilities to leading inclusive trainings for Media-Enabled Musketeers, a US-Russian endeavor sponsored by the Downtown Community Television Center (DCTV) in New York City and the Moscow-based Journalism Advancement and Support Center, a Russian NGO. The centers have united to connect people with disabilities in both countries with local media organizations.

“Media Enabled Musketeers” project focuses on the issue of covering disability and on raising disability awareness by mass media in Russia and the US. It is intended for both professional journalists and persons with disabilities. Professional journalists, journalism students and “citizen-journalists” with disabilities are formed into mixed ability teams, which will then produce short documentaries about issues that affect the disabled communities. Before beginning their work, these teams undergo trainings. Two such training seminars were held in Russia this January–one in Sergeev Posad, a city outside Moscow on January 18-19, and another in Krasnoyarsk in Siberia on January 25-26.

During the first two-day event, DCTV founder Jon Alpert, a well-known journalist and documentary filmmaker who has won 15 Emmys for his work, led trainings on the secrets of reporting and documentary storytelling. Olga Kravtsova, head of the Journalism Advancement and Support Center, served as both main project organizer on the Russian side and Alpert’s interpreter. Karina Chupina led trainings on disability sensitivity, contemporary understanding of disability and how to cover disability issues in the media.

Teams of professional journalists, journalism students and “citizen-journalists” are formed into teams, which will then produce short documentaries about issues that affect the disabled communities. Before beginning their work, these teams undergo trainings. Two such training seminars were held in Russia this January–one in Sergeev Posad, a city outside Moscow on January 18-19, and another in Krasnoyarsk in Siberia on January 25-26.

Since her FLEX year, Chupina has worked and volunteered with a number of organizations related to youth and disability advocacy, including the Council of Europe and the Fund of Assistance to Disabled Children in Russia. She also serves as president of the International Federation of Hard of Hearing Young People. She is currently a PhD student at Humboldt University in Berlin and holds several master’s degrees in sociology, international and European relations and management, and international journalism.

After these informative trainings, participants in Sergeev Posad were welcomed to Radonezhye, a local TV company, where they toured the studio and got to work shooting footage. Photos on Twitter from the Krasnoyarsk event show a participant’s “dream coming true” as she dances with Chupina.

The journalist teams will continue to work on their projects together after the seminars. Finished products will be shared at a special screening in Moscow sometime this spring. Similar projects are being undertaken in the US by the American division of Media-Enabled Musketeers, which will be exchanged with the Russian documentaries. A delegation of Russian participants also hopes to visit New York and DCTV this spring and to then introduce their American counterparts to Russia in the future.

Media-Enabled Musketeers has already received favorable media coverage, including a report on the Russian-language channel Radonezhye. Updates can be followed on Twitter using the hashtag #MediaEnabled.