Here we go. I am sitting in a small airport in Florida waiting for the boarding call to catch a flight back to London via New York. It has been ten years since I left this place, but I still remember my first arrival to Pensacola in 2003 as part of the U.S. State Department’s Future Leaders Exchange Program. Straight from the mountains of Central Asia, with a horrendous accent and an unpronounceable last name, I knew little how life-changing my one-year placement at the cradle of the Blue Angels and the world’s whitest beaches would be. Before that I was planning to spend all my life in Bishkek, becoming a typical local lawyer permanently stuck in the office, apart from a few vacation trips to the post-Soviet favorite holiday spot in Antalya, Turkey. However, my American voyage shattered this vision, revealing how small the world is and how wide the horizons are.

Nowadays, I am a PhD candidate in Politics and International Relations at the University of Exeter. Prior to this, I worked as an Assistant Professor and a Director of Communications and Public Relations at the American University of Central Asia and have received a Master of Science degree in International Relations from the London School of Economics and Political Science (LSE). My current research interests are centered on foreign policy, regime security, and the realpolitik of Central Asia. Most of the academic literature conceives foreign policy of Central Asia and Kyrgyzstan in particular through a journalistically seductive, but misleading concept of the New Great Game – the interplay between Russia, China and the USA, along with the emerging roles of Iran and Turkey. Through this lens the capacity of the local states to conduct foreign policy independently of the external powers is either diminished or completely dismissed. Accordingly, in my research, I am proposing an approach, integrative of internal, external and transnational variables, to test the claims regarding the relationships of weak states and their foreign policies and to contribute more broadly to the genuine understanding of the Central Asian region.

In fact, this trip to the place of my adolescence coincided with my current academic activities. I have presented my research on international political economy of supplying jet fuel to the American air base Manas in Kyrgyzstan at Columbia University’s Harriman Institute. The workshop in general explored the emerging contours of Central Asia’s informal connections with offshore worlds, and their implications for both academia and policy-making. Within this context and in the light of the American withdrawal from Afghanistan, I spoke about the American air base’s hyper-secret fuel contractors with their unknown beneficiaries, off-shore registrations, little visibility, and infamously excellent rapport with the regimes of the now-ousted Kyrgyz presidents.

Nonetheless, here I am: reminiscing about my life trajectory, whilst waiting for the boarding announcement. The past decade was a mercurial one that repainted the entire political landscape of the world, and I am not even mentioning the life of a young Kyrgyz lad. However, as a man once said, “Years fly by, but the heart stays in the same place.” And although my heart remained in the country of the forty-ray sun, its real beat was paced ten years ago in the land of the free and the home of the brave.

Taking this opportunity, I would like to sincerely thank my American family – Ted, Stacey, Dylan, Ian and Rohan – and all my Pine Forest buddies for who I am today. 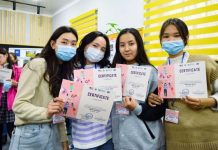