Home Estonia “Be the Yes Man”: How Two FLEX Alumni Grew During their Exchange...

Vladislav Virtonen ’19 (Sillamäe, Estonia/ Gladstone, MO) and Georgi Sokolov ’18 (Narva, Estonia/ Bonney Lake, WA) have been the two of the most active members of the Estonian FLEX Alumni community from the first minute they returned from their exchange year. The pair happened to be friends before they even went on FLEX, thus allowing them the opportunity to observe the positive effect the exchange can have on someone from a different perspective. Alumni Coordinator Katriina Gorjunov ’17 (Tartu, Estonia/ Kailua, HI) interviewed the pair of friends on what changes they saw in themselves, and in each other, thanks to their FLEX experience.

Vladislav and Georgi first met working on an international Erasmus+ project in Viljandi, Estonia. Georgi says of the experience: “Could anyone believe that Vladislav was shy at the time? He just stayed in his room and was alone most of the time.” The Eurasmus project was a first for Vladislav, but by the end of it he had decided to overcome his insecurities and open up to people more. For him, Georgi served as a great example of confidence and openness. Ever since meeting on that project, Vladislav sees Georgi as a big brother or mentor, because he always listens and supports him.

Another opportunity for growth occurred just a year later when the pair went on their FLEX exchange year. Georgi felt his greatest sense of growth came in the way he viewed his relationships with people and in what he chose to value in a friend: “Five months in, I realized that the way I chose friends was wrong. I was choosing friends for their skills or intellect and I did not care about their personalities. I realized that the only friends that stayed by my side till the end of the year were the ones who were the most compatible with me. After that, I stopped evaluating people the way I used to and now I have much more meaningful relationships than I have ever had before.” Vladislav says FLEX gave him a more positive outlook on life, noting that: “Today I greet everyone when I come into my classroom at school and I smile a lot. Some people consider it to be weird, but I do not really care. Today I am a much happier person and more content with my life.”

After their exchange years, the number of candidates in the region where Vladislav and Georgi live has doubled. The pair has not only actively worked to promote FLEX, but have also organized workshops, volunteered in their community, and started working on personal projects. Many have said it was their activeness after their exchange year and their positive experience that encouraged others to apply.

Just after Vladislav returned to Estonia, he volunteered in a refugee camp in Belgium. He later started working as teacher’s assistant for American Councils in Sillamäe, a free program that teaches English to families in the community that cannot otherwise afford classes. He is happy that he has had the opportunity to teach English, and improve upon his own, in his local community. 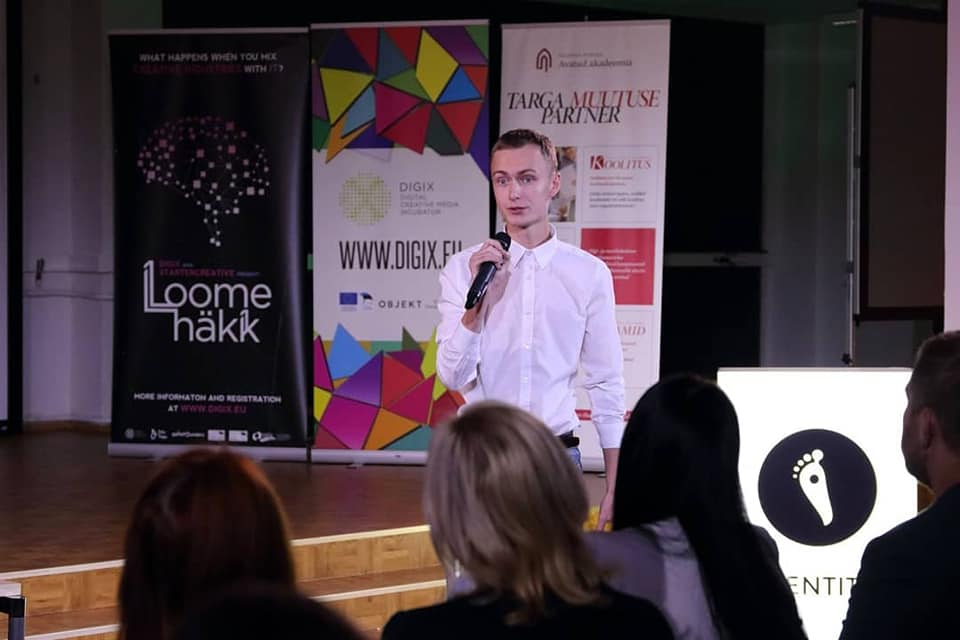 Last year Georgi started his own tech-startup called Shortwalk. Georgi says: “I have always been interested in doing this. A friend asked if anyone could code, and I decided to join.” He added, “In Estonia, the language of business is mostly English. After the FLEX program, I was not ashamed of my pronunciation and could focus more on the content. It gave me a lot more confidence.” Georgi then attended the Iacocca Institute Global Village for Future Leaders in Business and Industry program in 2019.

Together, Vladislav and Georgi organized a summer camp in 2018 called TECH Heroes. For this camp, they organized events in Narva and Kohtla-Järve, Estonia where they taught 100 students how to code. This year, they continued with this same idea and started their own programming academy for youth called “I Can Code” where they are teaching children as well as their parents.

When asked why they are so active in their community, Vladislav says: “I want to start something new. I want to discover something new. Someone has to do something. There a lot of people here who have skills, but they do not apply them. They need a push, for example, some support and I try to provide it the best I can.” He adds, “You should just do what you like. If you have a talent, try to share it as much as you can, and it will also develop your community. Always take the opportunities that come your way. Be the ‘yes’ man.”

Georgi says: “I just want to make my community better, that is what motivates me the most.”

A Host Family Reunion in Estonia

Karine Veersalu ’17: Using Her Professional Experience During the COVID-19 Crisis