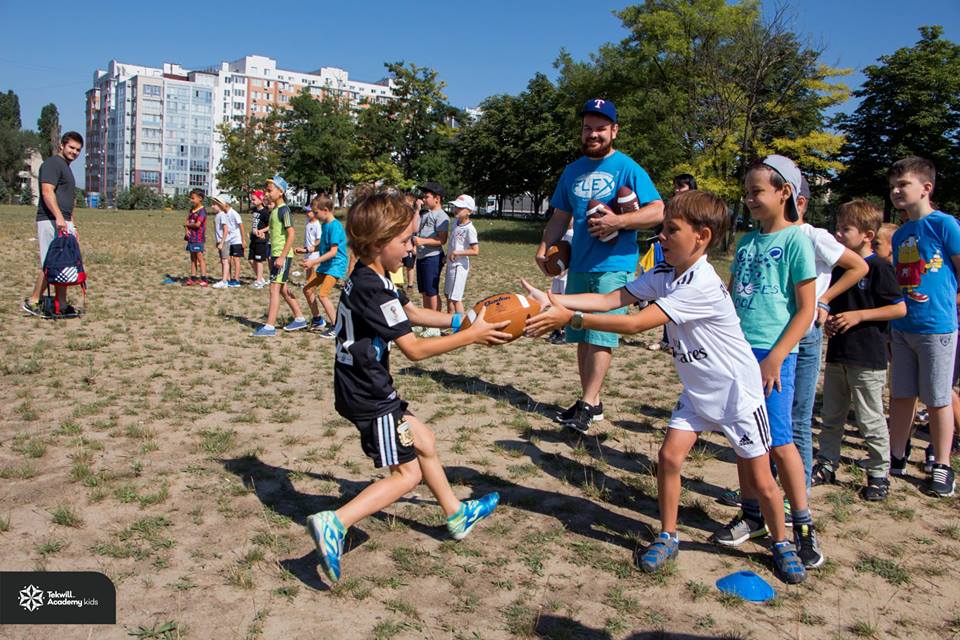 ‘My American school on FLEX was tiny and every team needed players. That’s why I could try any sport I liked, and I ended up playing baseball, basketball and American football. It was a great experience, but I never thought much of it. I just tried to make new friends,’ says Alexandr Hriptun ‘08.

What Alexandr couldn’t imagine is that a decade after his FLEX year he would be setting up the first American football league in Moldova. This is the story of how it happened.

‘Who are those guys?’

After returning to Moldova the FLEX alumnus finished high school, then university abroad, and started a prestigious job in the Japanese Embassy of Moldova – so far his journey had been a success story similar to a great many FLEX alumni. But once Alexandr felt established, he immediately decided to change things around.

‘I felt stuck in the routine – I went to the office, came back home, ate dinner, met friends. I liked my job and friends, of course, but I felt that my life lacked inspiration and the sense of community which I experienced while living and volunteering in the U.S.  For that reason, I started looking for opportunities to do something different. One day I came across a video of a Moldovan team playing a pickup American football game in Ukraine. I nearly jumped out of my seat. Who are these guys? Why American football? And how do I get to know them?’ remembers Alexandr. It turned out that the team from the video was called ‘Chisinau Sentinels’ and was the only American football team in Moldova. It didn’t have any funding, coach, or even anyone to play against – the teammates contributed about $12 a month to rent a field and came together to throw a ball around. He came to the first practice and never left.

‘Even though the ‘Sentinels’ had few resources, they loved the game and wanted to share it with others. I immediately felt that the team had big potential and began to think further,’ he notes.

‘I started to think how my alumni and FLEX Alumni Coordinator experience could help us get the needed support. Fortunately, we met an American diplomat who shared our passion for the game and he invited us to apply for a cultural grant from the U.S. Embassy. After a long period of working on the application we nervously submitted it and received funding!’ he says.

Football for the sake of diversity

With this additional support, in June 2018 Alexandr and his teammates organized the first tackle football summer camp. About 50 adult players from Moldova and Ukraine were trained by an experienced coach from West Virginia. Together they made the camp a great success.

Alongside organizing the camp, they began to promote the sport among young people under the age of 18 from regions across Moldova. ‘We wanted as many people as possible to learn about American football, so we focused our efforts on both tackle and flag football. The advantage of flag football is that it’s a very welcoming sport and can be played by everyone without much experience’.

Within a couple of months Alexandr found himself travelling all over Moldova and meeting with the newly-founded American football communities.

‘Last autumn I didn’t have one free weekend, I was always on the road. It was important to us, and to me personally, that Chisinau wasn’t the only center of American football in Moldova and that young people had an opportunity to play it everywhere,’ he says.

His efforts weren’t in vain. Half a year later, in November 2018, the first ever American flag football tournament took place in Moldova. To Alexandr’s disbelief, it immediately attracted international attention: ‘All together there were about 100 players who took part in the tournament, including expats, Peace Corps volunteers, and diplomats, of course, but there were also teams from the region, including two teams from Moscow ones and a girls’ team from Sevastopol. We were surprised and very happy,’ he says.

Now in its second year the American football league of Moldova is growing in numbers and experience. Alexandr and his teammates have had their first ever regular season in Romania and hosted a five-team tournament in Chisinau. As much as the FLEX alumnus enjoys playing with his team, he believes that the importance of the league is not in its expertise, but in its principal of diversity. All the games are open to everyone and now there are Moldovan, Russian, Israeli, American, and Ukrainian young people playing alongside each other. At practices and get-togethers at least three languages are spoken.

‘My FLEX year allowed me to imagine more. Sometimes the obstacles in life pop up because someone is not talented enough, or not ambitious enough; other times it is simply because someone simply never imagined that it could happen!  The key thing about American football for me is not even my personal ambition. It’s the sense of community that it gives me. To me football is family. And I’m so excited to see that others are beginning to feel this way too’.