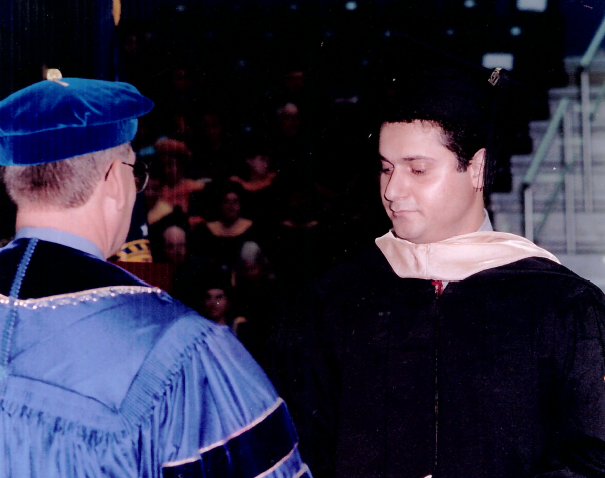 Hikmat Aliyev ’94 (Baku, Azerbaijan/La Harpe, IL) is an alumnus of the first cohort of the FLEX program.  After his exchange year, Hikmat returned to the U.S. to pursue a master’s degree in 2000. He received a scholarship from the Academy of Educational Development to pursue an MBA at Georgia State University in Atlanta, GA. He chose to major in Financial Accounting and minor in Managerial Accounting in order to use those skills to improve the financial reporting system in Azerbaijan.

According to Hikmat, the financial reporting system of Azerbaijan following the fall of the Soviet Union proved to be a challenge.   To rectify this, Azerbaijan sought to adopt the International Financial Reporting Standards (IFRS) in order to provide uniformity to financial reports under a more global format, thus improving Azerbaijan’s access to financial investments. However, Hikmat notes the scarcity of qualified staff (local IFRS specialists, etc.) to help with this transition. Thus Hikmat used his degree and skills from his studies in the U.S. to contribute to the national effort of converting Azerbaijan to the global financial standards.

Read below for an in-depth interview with Hikmat regarding his FLEX year, his decision to pursue an MBA in the United States, and his efforts to develop financial systems in his country!

Interviewer: How did your FLEX year influence your decision to pursue an MBA in the U.S.?

Hikmat: “I knew that had to complete my education curve with a master’s degree. Considering my FLEX experience and my positive exposure to U.S. culture, people, and mentality, I thought continuing my education in the U.S. would be a perfect fit.”

Interviewer: How did your years pursuing an MBA in the U.S. compare to your FLEX exchange year? Hikmat: “While pursuing an MBA from 2000 to 2002, I met more people from various parts of the U.S. with diverse backgrounds. For example: my favorite teacher, the accounting professor at Georgia State University, was a Native American born on a reservation who had amazing life experiences. Plus, the location itself differed greatly; La Harpe, my FLEX host city, was a small city in Illinois, while Atlanta is one of the largest and most diverse cities in the United States!

Interviewer: You mentioned how converting the Azerbaijani economy to IFRS helped promote investment, what other positive impacts on the economy and the government did this change provide?

Hikmat: “For starters, transparency is key. With uniform bookkeeping and accounting, Azerbaijani financial information is more legible and easily understood. This uniformity and standardization allows us to compare the performance and operational efficiency of various businesses and public projects. Lastly, using IFRS helps us to track and optimize expenses, which is especially important for publically financed projects and expenditures.

Interviewer: Where do you work now? Hikmat: “I am currently between jobs.  I previously served as the financial advisor to the Executive Director of the government-operated Azerbaijan Deposit Insurance Fund (ADIF), preparing the bankruptcy procedures for closed banks in Azerbaijan.  In this position I supervised and coordinated international audits for the closed banks and prepared their assets for auction sales.  My task ended with the completion of their audit and financial reviews. I plan for an extended vacation and quality family time until the end of 2017, when I’ll start my job search again.  ”

Interviewer: How would you say your work in the financial sector of Azerbaijan benefits the overall community?

Hikmat: “Azerbaijan’s banking system is fairly young and inexperienced. The banking crisis that hit the country at the end of 2014 demonstrated the weakness of the Azeri regulatory authorities and wide gaps in prudential norms. For example, it became clear that there were cases where banks were mismanaging their funds, abusing public trust, and in some instances, stealing the money of depositors and the government itself. My job was to identify the largest and most significant of these transactions and prepare the paperwork that could be used to trace and return stolen funds, as well as to improve the prudential and regulatory framework to avoid similar abuses in the future.  Overall, my job was to improve the banking regulatory environment, enhance the transparency of the national financial system, and trace the potential areas for abuse in order to protect the average Azerbaijani citizen’s money.”

Thank you, Hikmat, for your contributions to Azerbaijan and your continued appreciation of your FLEX exchange year! We look forward to seeing what you do next.

Share your FLEX story and use the hashtag #FLEX25.