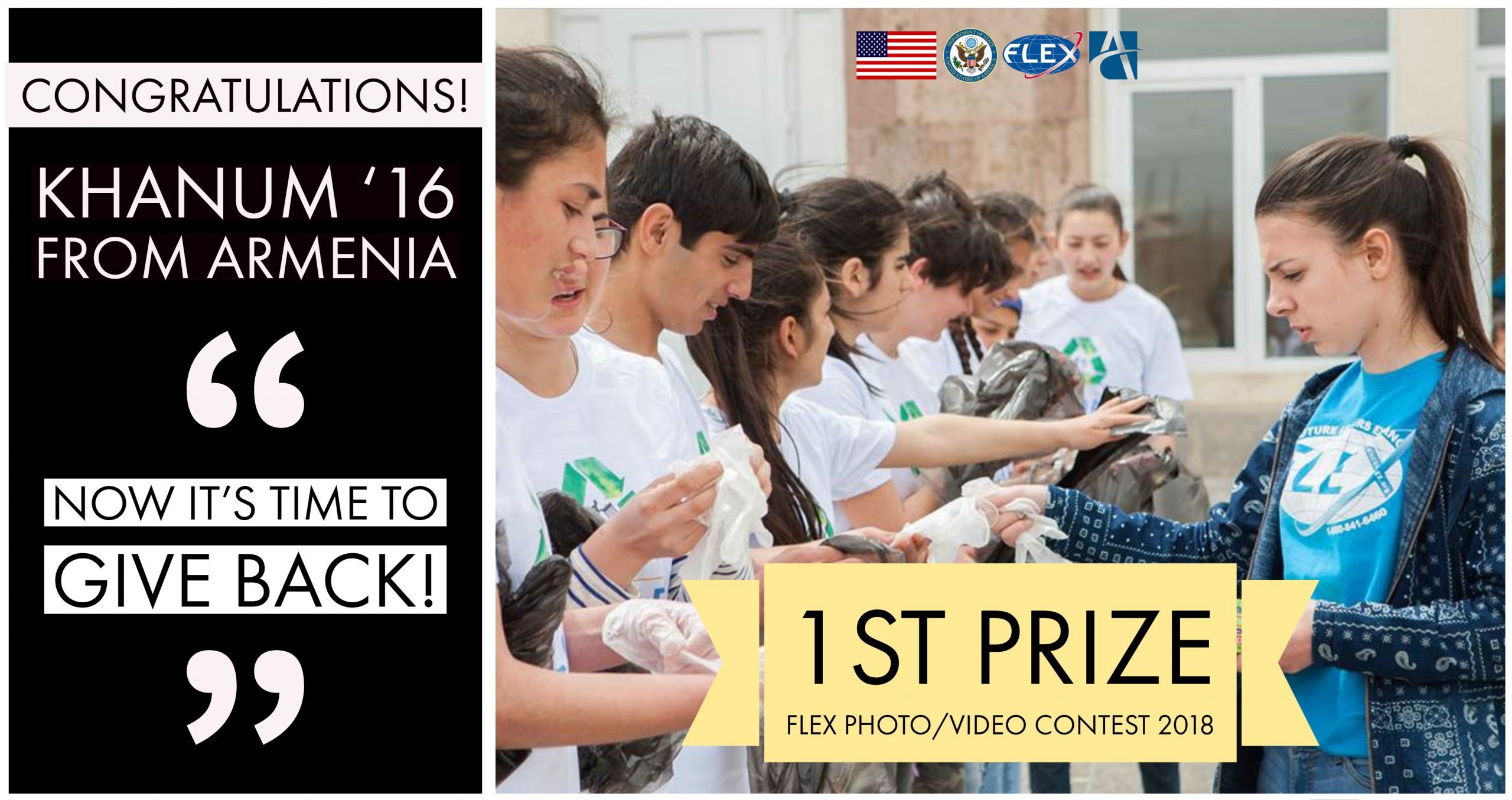 This year, for The FLEX Alumni Photo/Video Contest, we received eighty-nine submissions from FLEX Alumni all over the world. The contest was announced on June 15, 2018, and call for submissions came to an end on July 31, 2018. The winners were announced in September 2018. You can view all the submissions and winners for this year’s competition here. The four photo/video submissions that best highlighted the goals of the FLEX Alumni Program were chosen by a team of judges from the U.S. Department of State Bureau of Educational and Cultural Affairs. We also announced the Alumni Choice Award for the photo or video that received the most likes on our FLEX Alumni Facebook page.

Here are the winning submissions: “Now It’s Time to Give Back!”, “The picture is small evidence of what happened two years ago in a small village of Armenia called Karakert. Twenty participants from the whole region gathered to run, compete and collect the trash on the way. The cleanup-running marathon aimed to show that throwing the trash away is easy, but those who choose the difficult path and pick the trash up instead are more powerful, especially when you are not obliged. The two youngest of our participants, four and seven years old, now pick up every single piece of rubbish they see on the streets. Isn’t this an achievement? ԻՀԱՐԿԵ (iharke – of course in Armenian) – Khanum Gevorgyan’16 (Armenia) “Love and Care at EFL”, “In this picture, a group of EFL FLEX students are taking care of a dog during their volunteering activity at an animal shelter in Moldova on July 15, 2018. This picture shows how much a simple volunteering activity can mean a lot. This is one of the things I personally learned during my exchange year and volunteering activities, for which I’m very thankful and happy.” – Eduard Ciobanu ’16 (Causeni, Moldova / Raleigh, Moldova) “Impact of FLEX on Me”, “This video sums up most of the Alumni activities I have organized and have been a part of. All of them had a huge influence on who I am. Connecting with different people made me more open-minded and accepting of different views and beliefs.” – Marko Vuckovic ’17 (Nis, Serbia / Lynnwood, WA) “Spreading the joy of our FLEX Year on TV”, “I chose this photo because it demonstrates how FLEX Alumni are engaged every year to promote the program through different methods. Two other alumni and I chose to contact one of our national TV companies and made a video for the morning show called “Matinalii”. It was a great experience to collaborate with them because we were interested in learning how the journalists work and what their motivation to do this job is. Also, we had a great opportunity to learn more about different types of interviews (outside in the park or inside in a studio).” – Alexandru-Vlad Murzac ’17 (Chisinau, Moldova / Merrillville, IN)