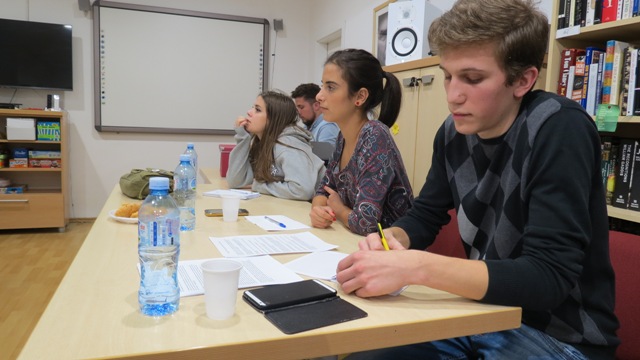 With elections set to take place in both the U.S. and Montenegro, local and international politics have been a hot topic around the water cooler and the most frequently covered topic in the media.  What better way to commemorate these two very important events then by organizing a presidential debate?  On September 30, at the American Corner Podgorica, FLEX alumni organized a mock U.S. presidential debate on the topic of education.  The topics of education and education reform are burning topics in both countries and the event aimed to highlight different perspectives of the republican and democratic parties in regards to the topics in the U.S. Alumni organizers of the event started first with their search of solid debate teams to represent the two sides. From among the FLEX Alumni community in Montenegro, representing Donald Trump, was Marija Jeknic ’15, Tamara Kadovic ’15, and Benjamin Franklin alumnus Stefan Boljevic.  Debating for Hillary Clinton were Sara Dubljevic ’16, Dina Kardovic ’14, and local debate expert Marija Dedic.   Using the American Center for the debate put the debaters and visitors in the mood to hear both sides of the U.S. story this election season and also helped to promote civic participation. Alumni aimed to reach out to youth and say, “Hey, you too, can get involved in your community!” The debate teams prepared for the event, researching their candidate’s approach to the issue. The audience, which consisted mostly of high school and college students, listened to the arguments and enjoyed the occasional sparks that ignited heated discussions.  Both side presented their best ideas for reforms that the education sector needs in order to improve education and make it accessible to all. Even though different reforms were showcased, one unified message presented itself; “Education is the single most important investment you can make!”

At the completion of the event, moderator and FLEX Alumni Coordinator in Montenegro Nemanja Ostojic ’12 asked participants to vote for the candidate who they would like to be the next U.S. president according to their stance on education.  Nemanja asks, “So who do you think won?”