Home Kazakhstan “Let his dream come true for hundreds of other young people.” 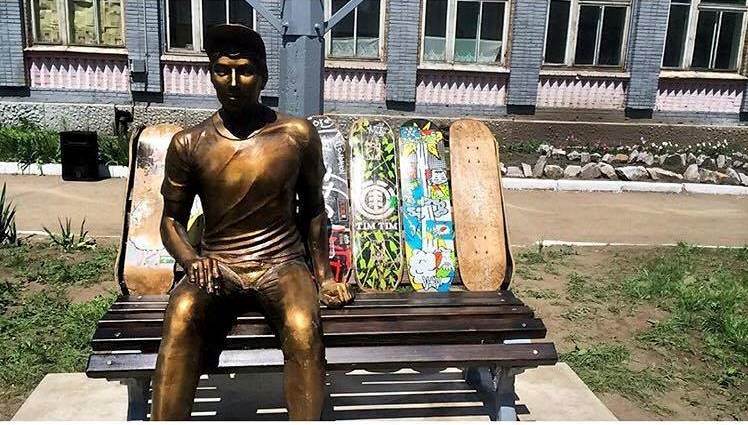 FLEX alumni worked together with family and friends of Tim Bekshentayev, who died a year ago in a car accident in the United States, where he was participating in the FLEX program. Volunteers created a skate park in tribute to Tim and recently it was made open to the public in Ust-Kammenogorsk, Kazakhstan.  U.S. Ambassador to Kazakhstan George A. Krol attended the opening.  The article below was translated from the original following the opening of the park.

Sportsmen arriving for the park’s tournament and the grand opening called it the best in the country. Over 60 BMX and skateboard participants, 30 from different cities, came to the event. They and the jury all agreed that the park’s quality represents the highest in the entire country.“We really built the park to world standards,” explained one the park’s founders, Zhanybek Bekshentayev. “The concrete was leveled by a helicopter to ensure the surface is as even as possible. We ordered professional jumps and props from St. Petersburg. This park is for all kids, it’s free – we are gifting it to the city. We want youth to have a place to have fun and enjoy in a healthy way, instead of drinking and smoking.” Zhanybek, his wife, Irina and their son Rafael created the park in memory of their youngest son, Tim, who died a year ago in a car accident in the United States, where he was participating in the FLEX program.

“Tim used to always ask me, ‘dad, let’s make even just a small skate surface,’ and he drew up some sketches of how it might look…I still have those,” said Zhanybek. “Let his dream come true for hundreds of other young people.” The family says the idea for the park came from above. Rafael noted that the project cost 25 million tenge (approximately USD 74,000.00) to complete; the family had to sell their apartment and their car to reach their goal. The Bekshentayevs also took it upon themselves, with help from the U.S. Embassy and FLEX alumni, to handle all the invitations and meetings with sports professionals. The family enjoyed the support of the Department of Internal Policy and Physical Education of Western Kazakhstan and the regional youth center.

At the opening’s  press conference yesterday, Rafael described the park to the regional akim (mayor), Daniil Akhmetov, and asked for help building a roof over the part, to protect it from the elements. You’ve made me so happy!” the mayor exclaimed. “I was hoping to build exactly this type of park- not only in Ust, but also in (nearby towns) Ridder and Zyryanovska. I promise that we’ll build a roof for this one.”The skate park is located behind School-Gymnasium #11 and is open to everyone.