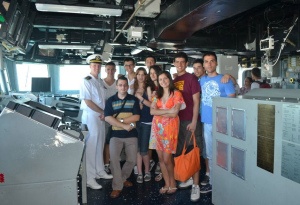 Since 2012, U.S. Government alumni have organized events in Montenegro aimed at teaching the country’s citizens the value of NATO membership and raising public support of NATO.  Through these events, alumni also worked for the subsequent benefit of developing the value of rule of law in Montenegro.  The December 2 announcement by NATO Secretary-General Jens Stoltenberg, that Montenegro was formally invited to join the NATO military alliance, invoked celebration among the alumni communities.

Below are a number of events that  the Montenegrin American Youth Alumni Association (MAYAA), which includes FLEX (former A-SMYLE) alumni and alumni of other U.S. Government exchange programs, have organized to support education about NATO among alumni and their peers.

August 2012
Summer Camp Today’s Children Leaders of Tomorrow
Thirty high school students from across Montenegro participated in a camp organized by MAYAA with presentations on current socioeconomic topics led by MAYAA members and experts in the field.  Some of the lectures focused on the NATO alliance and introduced participants to the alliance’s history and its current structure and role.  Speakers also shared information about Montenegro’s path to inclusion in NATO and the reforms that the country would undertake in order to become a member.  Participants attended lectures by members of the pro-NATO advocates in Montenegro and visited an Army barracks where they attended a session with a top Army official who spoke about military plans for alignments with NATO standards and Montenegro’s participation in the International Security Assistance Force mission in Afghanistan.  The camp also included a large English language learning component.  Photos from the event can be found here.

September 2012
Regional Alumni Conference Mission Common Goal
Alumni of the A–SMYLE and YES programs attended the regional alumni conference Mission Common Goal to identify common interests and common goals of countries in the Balkans.  Through discussions and presentations, alumni shared their ideas on countries membership in NATO and its role in the region, EU, economic recovery and development, stability in the region, and lasting peace. Eighteen university and high school debate teams with 70 participants from across Montenegro came together to debate on Montenegrin integration to NATO at the University of Donja Gorica in Podgorica, Montenegro. Prior to the tournament, teams completed research about NATO and Montenegrin integration to NATO to be ready to defend either side of an issue.  Speakers represented both sides of the discussion aisle and took questions about their stance on NATO in Montenegro.  Debate participants also took part in a tour of the local Army base, attended lectures, and learned about military engagements abroad including the International Security Assistance Force in Afghanistan and the Army and Ministry of Defense’s role in the NATO integration process.  During the three-day tournament, MAYAA organizers also held panel discussions with members Parliament , university professors, and representatives of the civil sector.  The project was funded by the U.S. Embassy through a grant awarded to MAYAA.  An article about the event can be found here.

October/November 2013
Civic Education Week
MAYAA president and former A-SMYLE Alumni Coordinator Ivan Vuksanovic designed and with the help of MAYAA members implemented a new project based on his experience as an alumni leader during the 2012 A-SMYLE and YES Civic Education Week.  The project Civic Education Week: “Government of the People, by the People for the People” was funded by the U.S. Embassy.  The project offered high school and university students in Montenegro the chance to learn about democracy, civic activism, and active citizenship through lectures and study visits to Montenegrin institutions, media outlets, and NGOs. The Civic Education Week also included a NATO component with lectures by representatives from the Atlantic Council, the Montenegrin Ministry of the Foreign Affairs and European Integration, and the Montenegrin Ministry of Defense. Montenegro simulation for 28 youth delegates and aspiring journalists from Montenegrin universities.  Participants simulated a meeting of North Atlantic Council by working on resolutions, lobbying their sides, and simulating the work of the body.  Among the speakers at the event were Deputy Ambassador of the United States Douglas Jones, then-Slovenian Ambassador, and a former Croatian Defense Minister. The simulation aimed to teach students about the NATO integration process, so that one day the participants too may participate in the accession of Montenegro to the Euro-Atlantic community. The event was organized with the support of the U.S. Embassy.