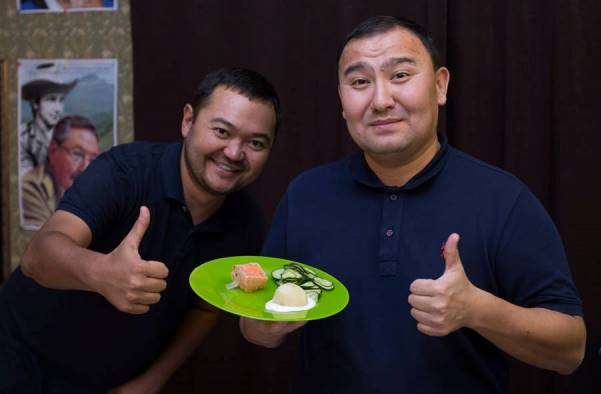 ‘FLEX is a unique network of talented people from different countries who are united by similar experiences and values. Let’s keep in touch with each other as the opportunities for networking and ideas exchange among us are enormous,’ is Sanzhar’s message to FLEX alumni. When in 1996 Sanzhar tried his first bite of sushi in Las Vegas where he studied as a FLEX exchange student, he had no idea that it was in that moment he had found the professional interest of his life. He had never tried anything like sushi before and throughout the year indulged in his new favorite food – as much as he could.

‘I loved eating sushi so much that I spent almost my entire monthly stipend eating at sushi restaurants,’ Sanzhar remembers with a smile. ‘After finishing university in Kazakhstan, I decided to open my own business and immediately thought back to my Las Vegas love. American sushi inspired me and my career’.

Kazakhstan is a land-locked country and twenty years ago there were only a small number of sushi restaurants in the country.  Despite having little competition at the time, Sanzhar was determined to produce sushi of the highest quality possible. Together with his business partners he traveled to South Korea to purchase a variety of sushi-making machines and opened a sushi stand in a shopping mall. The success was immediate and by 2007 the newly-born company SushiMix expanded its sushi delivery to fifty shopping-malls. When the global economic crisis hit Kazakhstan in 2009, it became difficult to maintain the same production levels and the SushiMix founders decided to take the company in a different direction.  Since Sanzhar and his partners had already started importing seafood and had a developed network of foreign contacts, they founded a new company called KingFisher. Rather than producing sushi, the company focused on selling the raw material.

Based in Almaty, KingFisher initially centered on Kazakhstan’s largest cities, Almaty and Astana, but has recently started reaching out to other regions. The company offers over 100 types of fresh and frozen seafood from more than 10 countries, from as far as India, Canada, Norway, and Chile. KingFisher works with nearly 200 clients and is regarded as one of the leading seafood companies in the country.

‘I’m proud to say that we have contributed to the development of fish and seafood industry in the country. People are very curious to try seafood now and our Facebook page is one of the most visited ones among businesses in Kazakhstan,’ remarks Sanzhar.

All fresh products are delivered to KingFisher within a sheer 48 hours from the time when they are caught – there is no time to waste when one deals with shrimps and oysters!  Speedy delivery has always been a race against time and it is illogical and extremely hard. We are constantly adapting and forging new partnerships,’ says Sanzhar. Besides selling raw seafood to the local market, KingFisher also produces readymade products and pre-packages fish based on the needs of their clients. Sanzhar believes that he developed his love for travelling and making friends abroad during his FLEX year. Apart from communicating with international partners on behalf of KingFisher Sanzhar is also actively involved in the work of the Central Eurasia Leadership Academy (CELA), a multicultural business initiative.  Founded by the Society of International Business Fellows (SIBF), CELA provides regional business leaders with opportunities to network and exchange experiences through international reunions. In September Sanzhar visited the annual Middle Eastern Leadership Academy summit in Egypt through his affiliation with CELA. ‘Attending these reunions is always very inspiring. It’s a chance to discuss business and start partnerships, but even more importantly to make friends from all over the world. Through CELA I feel connected with lots of countries and cultures. FLEX was my first international network and I’ve continued making friends since’.