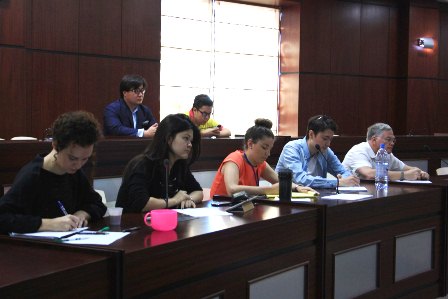 FLEX alumnus Aslan Sataybekov ’12 (Astana, Kazakhstan/ Chaumont, NY) together with the Nomad Debate Academy in Kazakhstan initiated a Debate Academy at his university,  Nazarbayev University, that aimed to cultivate critical thinking among project participants on global issues.  The project brought debate instructors from around the world to Kazakhstan and allowed Kazakh students the opportunity to develop debate and presentation skills. Aslan’s main idea is that debate is the key to development. Debate contributes significantly to the speaking and presentation skills of its participants and for participants it was a means of professional and personal development. Debate Club sessions were held weekly for 43 college aged students from L.N.Gumilyov Eurasian National University and Nazarbayev University in Astana, Kazakhstan.  Participants attended lectures from a diverse group of guest speakers, followed by practice debates sessions and exercises. All sessions were held in the British Parliamentary format, which is the commonly used international form of debate. Aslan attracted prominent American researchers and professors such as Dr. Steve Llano from St. John’s University and Dr. Alfred Snider from the University of Vermont to present through Skype at the Debate Academy and representatives of the U.S., French, and Belgian Embassies along with Kazakh Ministry of Defense also presented and attended sessions. Thanks to this project, the city of Astana has gained a group of individuals who can contribute to the conversation about the direction of Kazakhstan with the capacity to think critically, analyze relevant issues, and debate about this effectively.  As a long-term goal the Debate Club members plan to promote the topic of globalization among the general student population.  Some of the main topics that were discussed and debated were the ideas related to personal decisions, the state of the nation, current global military and social issues, and civil rights.

The success of this project is seen through the significant increase of the club’s membership to over 60 participants. Three of the Academy’s leaders were selected and received full scholarships to train debates at a week-long academy in Bishkek, Kyrgyzstan. The next Debate Academy is already scheduled to start in 2015.

More details about the project can be found at http://ru.idebate.org/news-articles/86189 or at the Nazarbayev University Debate Club’s official Vkontakte Page.