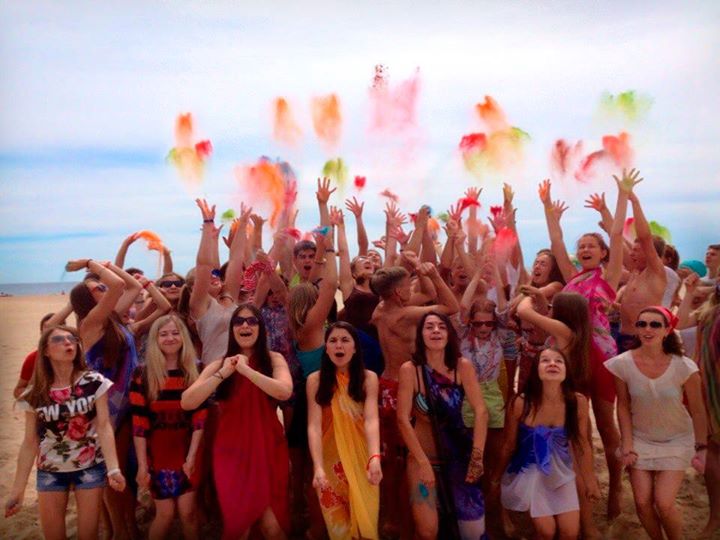 The FLEX Alumni program is very pleased to announce the results of the 2014 FLEX Alumni Photo/Video Contest!  We would like to thank all who took part in and supported the contest by submitting photos and videos from FLEX Alumni events and voting for your favorite submissions. This year the contest was competitive and it received more than 100 unique submissions, which represented alumni activities and projects across Eurasia. The photos and videos submitted were taken by FLEX alumni and depicted alumni, youth, and community members engaged in community development.  Representatives of the U.S. Department of State’s Bureau of Educational and Cultural Affairs formed the judging panel for the contest. American Councils and the U.S. Department of State’s Bureau of Educational and Cultural Affairs are pleased to announce the winner of 2014 FLEX Alumni Photo/Video contest:  Vladyslav Kolbaya ’13 (Kupyansk, Ukraine/Nisswa, MN). Vladylav’s submission is entitled Festival of Colors and features the successful FLEX alumni project “American Summer Camp UNITY.”  The camp, which brings together youth from across Ukraine, offers participants a taste of a U.S.-style summer camp and includes classes on diversity and tolerance, teambuilding, and English language.   The photo highlights the effort and active engagement of FLEX alumni in promoting tolerance and diversity among their peers.  Vladyslav’s video from the UNITY Summer Camp also received the award for the best video of the contest.  As a team leader Vladyslav created the video summarizing his team’s activities during UNITY camp. The video can be found at:  https://www.youtube.com/watch?v=69Q8vZdgddM The second place photograph is from Marina Esanu ’14 (Ungheni, Moldova/Hannibal, NY).  Marina’s photo is from a FLEX Alumni event and shows alumni demonstrating the glasses analogy taught during their pre-departure orientation (PDO).  All FLEX students learn during their PDO that while they are in the U.S. they will see the world differently than others in their communities because of their culture and past – their “cultural lenses.”  This photo promotes understanding of cultural differences and highlights how FLEX allows you to see the world differently. Arsen Simonyan ’03 (Stepanavan, Armenia/Colon,NE) with his  photo from the 2013 FLEX Alumni Grant project “Girls Leading Our World (GLOW) Camp 2013” received the third place prize. FLEX alumni and Peace Corps trainers, together with high school participants of the camp, took a group photo in the form of a big heart. This photo features FLEX alumni as leaders in their communities and reflects the impact they are making on a younger generation. The Alumni Choice Award photo was submitted by Azis Toktobaev ’14 (Bishkek, Kyrgyzstan/Palmyra, VA) and was taken during the 2013 FLEX Alumni Grant project “El Campo” in Bishkek.   This project had a great impact on Kyrgyzstan’s school students, helping them to grow personally and professionally, to become more independent, self-confident and full of enthusiasm to change their community for better. In the photo, FLEX alumni organizers and campers spread their arms open to show the rising future of Kyrgyzstan’s youth.